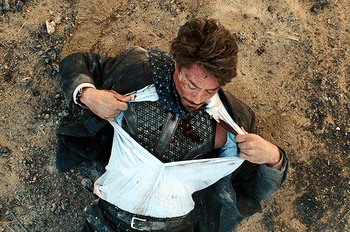 It's not enough to stop shrapnelnote  Shrapnel is usually going at rifle speeds, which makes it hard for what is presumably a lv2 or 3A vest stop it. — notice the bloodstain — but it's better than nothing.
Artemus Gordon: If I may make one last request? That she aim for my heart... the heart that loved this country so much.
Loveless: Shoot him in the head.
Artemus Gordon: Damn!
— Wild Wild West
Advertisement:

They cost between $100 and $600. They will (usually) save your life. Few non-military/police heroes ever wear one, unless they are a major character and it is dramatically required that they get shot. Then we're not told about it in advance and they'll look dead for a few moments.

In military or combat fiction, the bulletproof vest goes hand-in-hand with the Kevlar helmet. Any character who removes his helmet when a gunfight has seemingly stopped automatically takes a round in the head, unless that character is a hero, and needs to show his face for some dialogue. A common way for the military Red Shirt to bite it.

In fiction, a concealable soft vest is capable of stopping anything up to and including magnum centerfire armour piercing rifle rounds. The shot might knock you down and leave you with a hole in your shirt, but you'll get up just fine. In games, vests either stop all damage or reduce it, but are often destroyed when they take enough damage (See Body Armor as Hit Points). Video game injuries are a matter of mathematical equation, whereas in Real Life there is a great deal of randomness involved.

In reality, the kevlar armour issued to police, some close protection details, and VIPs will only cover then against handgun ammunition. Shotgun rounds are largely ineffective against armor, due to even the stiffer shot loads being only equivalent to 30-something caliber spherical balls — not good for piercing. Top tier soft armor will stop all but the nastiest handgun rounds, and hard armor is functionally impervious to pistol rounds. To defeat rifle ammunition, you'll need armour plates made of steel or ceramic.

The difference is that steel and other metal inserts are more multihit resistant, while ceramic has the advantage of sheer strength, and higher strength per area, as well as weight. Plates designed to stop the bigger bullets are also very bulky and not very form-fitting, thus unlikely to be worn underneath clothing. Soft armor imparts great impact, but hard armor plates are basically immune to it, only really bruising with heavier rounds from snipers.

Fictional bulletproof vests may also stop blades, ice picks, or similar weapons; however, in real life, soft armor vests intended only for protection against bullets are ineffective against stabbing. This is because the armor uses high-strength fiber cloth to spread out the impact of a bullet, but the point and edge of a knife can slip between the weave of the fabric and cut it open. There are actually vests for defending against stabs, though. There are two different stab vest styles. One is designed to protected against engineered blades, such as those belonging to knives. The other is meant to protect against spike type blades, like those typical of improvised stabbing weapons, such as screwdrivers and shivs. Most military body armor will hold up fairly well against slashing attacks, though, because the designs are meant to protect against fragments, which are flying, sharp bits of metal. Hard ballistic plates will defeat any kind of blade attack, however.

And don't forget, when someone does get shot when wearing a vest, has been mistaken for dead, gets emotionalized over and then sits up with a bewildered look on their face, they will always, ALWAYS part their shirt to reveal the vest, usually with bullets showing in it. They will then immediately remove the vest, even if the danger might not be over.

When bullets are stopped by things that cover very little area in addition to being unlikely to be effective if hit, yet do so by sheer force of sentimentality, that's a Pocket Protector. Bulletproof Human Shield is the trope when bullets are stopped by an unwilling Mook or bystander. If a vest is worn by a Badass in a Nice Suit, it will overlap with Waistcoat of Style.

Nowadays, modern vests of various types can double as bulletproof vests by having armor plates inserted into it.

Alexis shoots an armed suspect while searching for any guns that were purchased illegally from an arms dealer. The suspect was downed, but the vest he wore underneath his buttoned shirt saved him from being killed.

Alexis shoots an armed suspect while searching for any guns that were purchased illegally from an arms dealer. The suspect was downed, but the vest he wore underneath his buttoned shirt saved him from being killed.