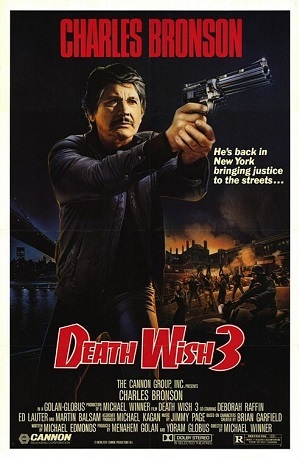 "It's like killing roaches. You have to kill 'em all, otherwise what's the use?"
— Paul Kersey
Advertisement:

Kersey returns to New York to visit an old buddy from his days in the Korean War, only to find him dead after another attack by gang-punks. He is mistakenly arrested for the murder, but the head cop offers him a deal: reporting any gang activity to him in exchange for being able to kill all the punks he wants. Kersey moves into the buddy's old apartment, where he and his neighbors are viciously attacked by the gang, and things escalate until all-out urban warfare erupts in the final fifteen minutes, leading to Charles Bronson's biggest onscreen kill count ever. It is also the movie that popularized the Wildey Survivor pistol in .475 Wildey Magnum (and saved Wildey from then-imminent bankruptcy in the process).

It was adapted into a videogame for 8-bit microcomputers by Gremlim Graphics, resulting in a proto example of the urban free-roaming genre.