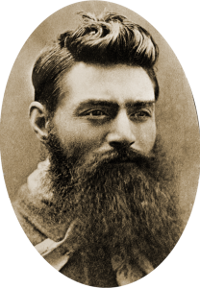 Kelly, photographed the day before his execution.
Advertisement:

(December 1854 – 11 November 1880) was a bushranger in colonial Victoria and New South Wales. Of Irish descent and an impoverished background, he seems to have taken to a life of crime out of equal parts of a lack of better career options and revolutionary idealism. But unlike most poor Irish in Australia, Kelly aspired to something beyond merely petty crime (although that too had a place when money was tight).

The Kelly Gang, which consisted of Ned, his younger brother Dan, Joe Byrne and Steve Hart, terrorised Victoria between 1878 and 1880. He and his gang first went on the run after Kelly supposedly shot a policeman who was making improper advances on one of his sisters. Shortly thereafter, they got into a shootout with the police pursuing them at Stringybark Creek. The gang escaped, killing three of the policemen, and were soon declared outlaws in the state of Victoria. After that, they mostly robbed banks, usually with relying on a mixture of fear and courtesy (Kelly in particular could really turn on the charm) to get the job done without violence.

In 1880, Kelly conceived of an audacious scheme to ambush the police and strike a blow against the authority they represented. Forging medieval-like armour out of stolen ploughs, Kelly and his gang captured the town of Glenrowan in north central Victoria, and took over the local pub as their headquarters. But the ambush was short circuited by an escaped hostage, who warned the police before the trap could be sprung. A tense siege lasting more than a day ensued. Kelly was captured after police shots brought him down (he had neglected to armour his legs), Byrne was killed by a stray bullet, and Steve and Dan chose to commit suicide rather than surrender to the police.

Kelly was taken to Melbourne, where he was nursed back to health, and a trial date was set. The actual charges laid against him mostly concerned the killings at Stringybark Creek - since murder carried the death penalty, lesser charges were deemed irrelevant. He was found guilty, and hanged on November 11, 1880. His last words were reportedly "Such is life."

For a concise and entertaining summary of Kelly's life and career, Extra History did a 5-part series on him

Tropes that apply to Kelly