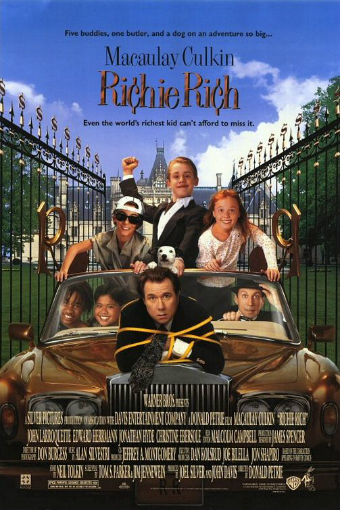 Richie Rich (stylized as Ri¢hie Ri¢h) was the 1994 film version of the classic Harvey Comics character of the same name, starring Macaulay Culkin in his last official role as a "child actor".

Richard "Richie" Rich Jr. (Culkin) is the 13-year-old son of the world's richest man, billionaire business magnate and investor Richard Rich Sr. (Edward Herrmann). While the caring, jovial Richard Sr. and Richie's mother Regina (Christine Ebersole) are dedicated parents who have always provided him with the best of everything, his sheltered upbringing has cut him off from some of life's simplest pleasures — other than his loyal butler, Herbert Cadbury (Jonathan Hyde), Richie's only friends are the spoiled children of other billionaires, who have little interest in down-to-earth pursuits like his passion for baseball. When Cadbury arranges for the local children of blue-collar factory workers to come play at the Rich estate, Richie is overjoyed.... until the news breaks that his parents are missing and presumed dead following a plane crash.

Unbeknownst to Richie, the Riches' plane was bombed by their greedy Rich Industries CFO Lawrence Van Dough (John Larroquette), who seeks to gain control of their empire, plunder their famed family vault and inherit their vast fortune, with the help of Ferguson (Chelcie Ross), the Rich family's traitorous head of security. Van Dough's plan, however, immediately hits three snags: first, Richie's parents survived the crash and are merely lost at sea; secondly, he learns too late that the vault has been sealed by a voice-activation lock which requires the presence of the lost parents to open it; and lastly, Richie himself (who was originally supposed to be aboard the same plane) has decided to step up and run the Rich business empire until his parents are found, with Cadbury serving as his legal guardian.

Richie immediately proves to be a business dynamo, achieving even more fame and fortune while bringing in his young friends as "research consultants" on the company's various kid-targeted products. The tide shifts again though, when Van Dough and Ferguson frame Cadbury for the bombing, removing the underage Richie's by-proxy authority over the company and essentially leaving him a prisoner in his own mansion after Van Dough takes over legal guardianship of him, and uses Cadbury's arrest to fire all of the other family servants en masse, leaving Ferguson and Van Dough's own personal security forces to take over and refuse to allow Richie to leave the estate grounds or his friends to see him.

Richie's only hope of getting his butler, his parents, his family business and his life back ends up being his live-in research scientist, Professor Keenbean (Mike McShane), who devises a way to spring Cadbury from prison and attempt to locate the Riches' liferaft. Richie and his friends must then infiltrate the now highly-secured Rich manor, but meanwhile, Van Dough and Ferguson learn that the Rich Parents are actually still alive and are attempting to retrieve Richard and Regina in order to coerce them to bypass the voiceprint lock to their legendary family vault...

A sequel, Richie Rich's Christmas Wish, was released to Direct to Video in 1998.