We Have Ways of Making You Talk 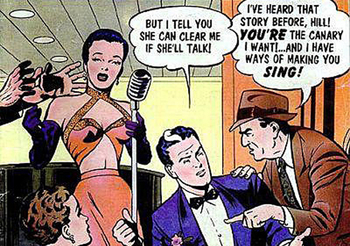 Sid: Oh, a survivor. Where is the Rebel base? Talk!
(Throws Woody across the room)
Sid: I can see your will is strong. Well, we have ways of making you talk.
(Raises a magnifying glass as he starts to burn a hole in Woody's head)
Sid: Where are your Rebel friends, now? Hehehe!
— Toy Story
Advertisement:

This is a Stock Phrase often used by the leader of a faction to assure a defiant captive that they can get the information they want by less than normal means. Usually, pronounced "Vee haff VAYS of making hyu tok!"

Normally, this involves highly unorthodox interrogation and/or torture techniques, but these interrogators can usually spice things up with more extreme or less conventional methods. Note that heroes can do this too, they just tend to use inventive rather than cruel means.

Here are a few variants:

The original given source of this phrase, Lives of a Bengal Lancer in 1935, is actually a case of Beam Me Up, Scotty! — it's not the actual line.

Contrast Too Kinky to Torture. Not to be confused with I Have My Ways. If the Torture Technician does not himself say this, expect him to be nearby waiting to go about his work.