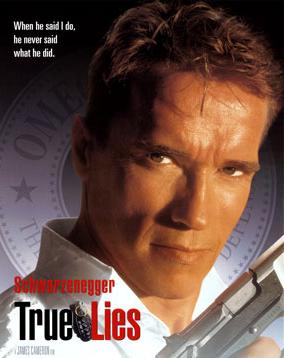 Helen: Have you ever killed anyone?
Harry: Yeah, but they were all bad.
Advertisement:

True Lies is a 1994 action comedy (bordering on Affectionate Parody) starring (of course) Arnold Schwarzenegger as the Action Hero, Jamie Lee Curtis as the wife, Eliza Dushku as their daughter, Tia Carrere as the Femme Fatale, Charlton Heston as Harry's boss, Bill Paxton as a sleazy womanizer, and Tom Arnold as Arnold's beleaguered partner. It's directed by James Cameron, meaning there are some sweet explosions. While it's hardly high art, it's good popcorn fun, mostly because it can't really decide whether it's trying to be an action movie or a parody of same, and so - possibly due to the infallible combination of Cameron and Schwarzenegger - does both pretty darn well. It was released on July 15, 1994.

Arnold plays Harry Tasker, who his wife thinks is a mild-mannered computer salesman; in truth, he's a top agent for the clandestine Omega Sector, the United States' "last line of defense". Helen, played by Curtis, resents the long "business trips" he takes, which make it hard for him to keep his appointments with the family. While Harry is off once more tracking a dangerous terrorist, he learns Helen has apparently been seeing someone on the side—a used car salesman pretending to be a spy.

He uses his agency's resources to teach the other man a lesson—and give his wife some adventure—but when a harmless "assignment" he sends Helen on is interrupted by the dangerous terrorists he was tracking, she finally finds out what he's really been doing on those business trips.

Despite both Cameron and Schwarzenegger wanting to make a sequel, plans were mired in Development Hell by both Arnold's political tenure and the September 11th attacks; there they eventually died. CBS has given an order for a TV series adaptation on May 2022.

Based upon the 1991 French movie La Totale

by Claude Zidi with Thierry Lhermitte, from which it kept most of the plot, transported it over to America, and ran it in typical Hollywood style which, honestly, tends to work pretty well for action comedy. It spawned a top-down shooter Licensed Game of same title on fifth-generation consoles and the Game Boy.