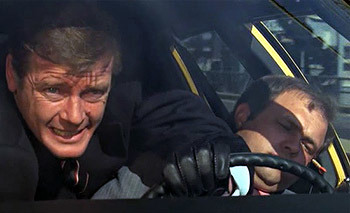 No, Mr. Bond, I expect you to drive!
Advertisement:

When the driver of a vehicle is shot, otherwise killed, or rendered unconscious and instantly suffers a muscle spasm that extends the driver's leg, pushing the accelerator pedal all the way to the floor. Then instant rigor mortis sets in, keeping it there. Naturally, this causes the vehicle to accelerate to ludicrous speed* No, not that kind of Ludicrous Speed, putting anyone in the way of this driving dead man at mortal risk.

Common to action movies and driving games. Sometimes justified if the throttle or accelerator is a hand control, and the driver slumps over it, holding it open or down. Subversions may involve the presence of a Dead Man's Switch.