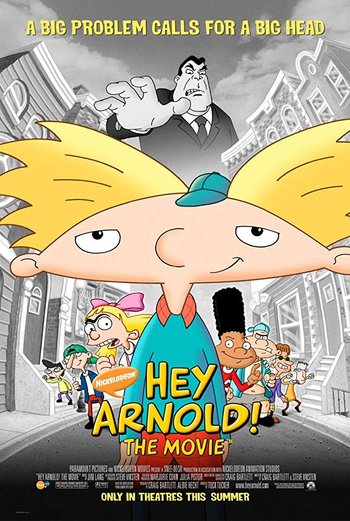 "This is our neighborhood and we're not giving it up without a fight!"
Gerald: Why do you do that Arnold? Why do you always have to look on the bright side?
Arnold: Somebody has to.
Advertisement:

Hey Arnold! The Movie is an animated film based on the Nickelodeon animated TV series Hey Arnold! The film was released in theaters on June 28, 2002 by Paramount. It is the final Hey Arnold! production to feature Spencer Klein as Arnold Shortman, Sam Gifaldi as Sid, Steve Viksten as Oskar Kokoshka and Baoan Coleman as Mr. Hyunh.

The film takes place between "Eugene, Eugene!" and "April Fool's Day". Alphonse Perrier du von Scheck (Paul Sorvino), CEO of Future Tech Industries (FTi for short), plans to demolish Arnold's neighborhood and build a large shopping center in its place, forcing all of the inhabitants to move away. Helga G. Pataki (Francesca Marie Smith), Arnold's Loving Bully is torn between helping Arnold save the neighborhood, and allowing it to be destroyed (as her father, Big Bob (Maurice LaMarche), will be opening a beeper store in the new shopping center, which will make the Patakis very wealthy in the process), but she ultimately chooses to help her beloved Arnold. Secretly of course.

Arnold rallies the neighborhood and hosts "Blockapalooza," a block party held to protest against FTi's plans. Unfortunately, the permit allowing them to close a public street was stolen by Scheck's employees, so the police arrive at the scene and declare Blockapalooza illegal. Arnold's grandmother Gertie (Tress MacNeille) is jailed for being hostile to the police suppressing the rally.

As demolition day closes in, Gerald Johannsen (Jamil Walker Smith) tells Arnold to stop looking on the bright side of things and that you cannot always win. While everyone else accepts their fate, Arnold doesn't give up so easily.

While packing up their things and reminiscing about the past, Arnold's grandfather Phil (Dan Castellaneta) informs Arnold of the "Tomato Incident", a Boston Tea Party-like event that occurred in front of the boarding house during the Revolutionary War, which Arnold realizes would mean that the neighborhood is a historic landmark and cannot be torn down. However, the declaration that would prove this has mysteriously disappeared, and it doesn't take Arnold long to figure out that Scheck has it. With Gerald and, unbeknownst to him, Helga as his Mission Control, Arnold makes it his mission to recover the document from Scheck before it's too late.

A Made-For-TV sequel, Hey Arnold! The Jungle Movie was released on November 24, 2017.

WARNING: This a very spoiler-heavy movie, and while some are marked, others may not be. Proceed at your own risk.