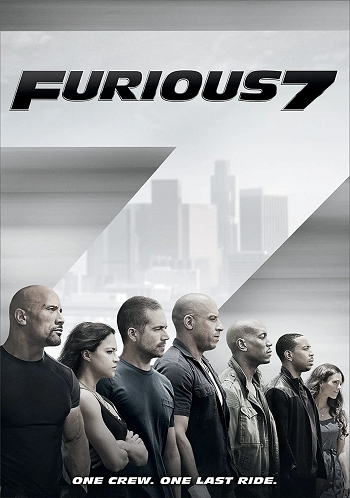 ♫ It's been a long day without you, my friend
And I'll tell you all about it when I see you again. ♫
"Looks like the sins of London have followed us home."
— Dominic Toretto
Advertisement:

Furious 7 is the seventh installment in the The Fast and the Furious franchise.

The film brings all the characters together (except for Han) for a dramatic climax to the current story arc, directed by James Wan (of The Conjuring and Insidious fame). The story takes place after the events of Tokyo Drift and has the crew facing off against the brother of the previous films villain, the rightly feared Deckard Shaw (played by Jason Statham) who of course is seeking revenge for the events of the sixth movie. Complicating matters is the fact the CIA end up getting Dom and his crew involved to catch a international criminal who Deckard just happens to be working with.

This film is sadly the last appearance of Paul Walker as he was unfortunately killed in a car accident over the 2013 Thanksgiving holiday. This caused production of the movie to stall to allow the studio to rework the film accordingly. Eventually in July 2014, Vin Diesel announced via his Facebook page

that the seventh film managed to finish production and was released on April 3, 2015.

For the music of the movie, see Furious 7 Soundtrack. The movie was originally titled Fast & Furious 7.