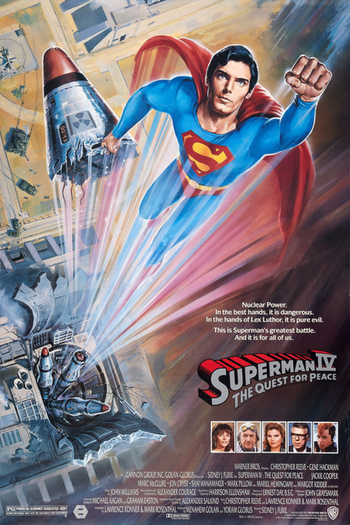 Superman IV: The Quest for Peace is the fourth and last official installment of the Superman movie series that started in 1978 with Superman: The Movie. Released in 1987, four years after the poorly-received (but reasonably profitable) Superman III, this film was an unmitigated flop, both critically and financially.

Directed by Sidney J. Furie, the film's plot revolved around an anvilicious anti–nuclear weapons message and a risible villain named "Nuclear Man" (no relation to DC Comics hero "Firestorm, the Nuclear Man"). When a young boy asks Superman to rid the world of said weapons, he finds making the decision a challenge but ultimately agrees to do so, and the world's governments approve. Unfortunately, Lex Luthor has just escaped from prison with the help of his teen nephew Lenny (Jon Cryer). Lex becomes a black-market arms dealer and takes advantage of Superman's disposal of weapons to create the hero's Evil Knockoff, Nuclear Man. Meanwhile, a media tycoon buys out The Daily Planet and turns it into a glorified tabloid, while his daughter, Lacy Warfield (Mariel Hemingway), takes an interest in Clark Kent.

Superman IV was plagued by a severely reduced budget compared to previous films in the franchisenote Only $17 million were spent on making this movie versus $55 million for each of the first two and $40 million for the third. (courtesy of The Cannon Group, which bought the franchise after the Salkinds sold it due to the poor reception of Superman III), and it shows in copious amounts of Special Effect Failure throughout. The returns of Gene Hackman and Margot Kidder to the cast did nothing to save this movie. It's also notable as the shortest film in the series at barely an hour and a half. One cut extended action sequence features the "prototype" of Nuclear Man, who closely resembles DC Comics' Bizarro character. The comic book adaptation actually addressed several plot holes and Deleted Scenes, including the aforementioned failed prototype Nuclear Man. It also changed Superman's speech from being idealistic to the point of unintentional self-parody to a message of vigilance.