Literature / Something Wicked This Way Comes

"By the pricking of my thumbs, something wicked this way comes."
—Mr. Hathaway 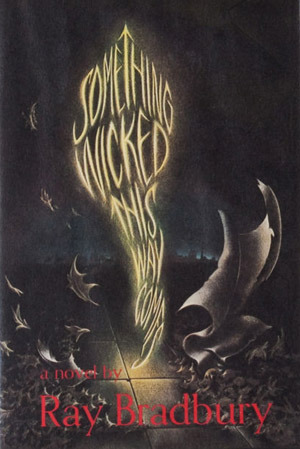 Thirteen-year-olds Will Halloway and Jim Nightshade are the best of friends, despite their contrasting personalities. A week before their fourteenth birthdays around Halloween, a carnival comes rolling into town. Even though carnivals aren't uncommon in their time, October is a very late month for them to be still running in. That isn't the only odd thing about this carnival, as Will and Jim soon find out that its freaks are offering townspeople more than cotton candy and amusement rides - offers that turn out to be more than their receivers bargained for.
Advertisement:

Things become a lot more dangerous for the boys when the circus folk, led by the tattooed Mr. Dark, get wind of them knowing too much and plan to make sure that their secrets remain secret by bribery or trickery. Fortunately for Will and Jim, Will's father Charles Halloway proves the exception to the Adults Are Useless rule and becomes a valuable ally. Even so, the carnival has more up its sleeve than the regular parlor tricks, and the lure of its offers may be too great for one of the boys to resist...

A novel by Ray Bradbury, somewhat of an expansion of "The Black Ferris", one of his earlier short stories. The story is more fantasy/horror than science fiction but still has his Signature Style all over it. Disney produced a film adaptation from a script written by Bradbury himself starring Jason Robards as Charles Holloway and Jonathan Pryce as Mr. Dark.

"Something Wicked This Way Tropes":

Tropes that are specific to the Movie Adaptation include the following: