Evil Is Not Well-Lit 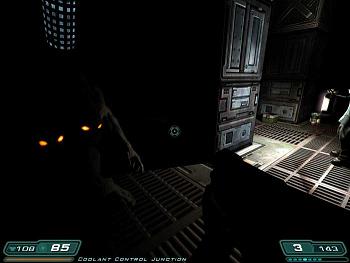 ...except the eyes.
"Men have preferred darkness to light because their deeds were evil. For everyone who does wicked things hates the light and does not come toward the light, so that his works might not be exposed."
— John 3:19-20, The Bible
Advertisement:

Any scene location where the villains do their plotting is invariably dark. This includes, but is not limited to, starship command centers, unethical laboratories, and throne rooms. A more personal effect is when the villain seems to absorb the light around him, presenting dramatic shadows that you could have sworn weren't there moments before the heroes arrived.

In some circumstances, it's obvious. The villains don't want to meet on the street, either to conspire or with a victim of Blackmail, or travel with their ill-gotten and conspicuous goods, or go into their stronghold when it's broad daylight; people will see them. Night is necessary to hide. Also, they may not want the characters they are talking to to be able to recognize them, and gloom helps there.

But they don't turn on the lights once they're inside the stronghold and everyone knows them.

Interestingly enough, it has been produced in a lab: people are more likely to be dishonest/commit moral transgressions in a dark environment.

Perhaps it is revealing What You Are in the Dark.

Often the setting for the Omniscient Council of Vagueness. Glowy orange or purple colors are optional. Compare Empathic Environment, Sliding Scale of Shiny Versus Gritty, and Face Framed in Shadow. See also Dark Is Evil, Darkness Equals Death, and Nocturnal Crime for why this trope is employed, and Chiaroscuro (and the page image) for another reason why. Compare AND contrast Daylight Horror and Light Is Not Good. Compare The Future Is Noir, a setting trope for the Sci-Fi genre.