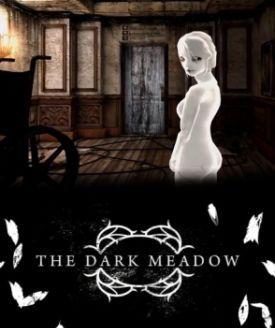 "This is a terrible place. A once great institution of healing twisted into a terrifying pit of corruption and death. I've been here longer than I can remember. But now that you're here, maybe we can work together to escape this nightmare. After all, you have to trust someone. And since I'm the only one not trying to kill you at the moment, it might as well be me! I am not going to lie to you, the most likely outcome for you is ceaseless torment. I probably should've lied to you... shouldn't I?"
—The Old Man
Advertisement:

The Dark Meadow is a 2011 Survival Horror game for the iOS (iPad and iPhone) and Android operating systems. It was developed by Phosphor Games, a fledgling company that utilizes Unreal Engine 3.

At the beginning of the game, a nameless man wakes up in an abandoned hospital uncertain of how or why he got there. An old man, who mostly speaks to you through the speakers, warns of a beautiful witch whose minions roam the halls seeking the living. Equipped with a crossbow and a sword, it's up to you to take on the white witch and her hordes of grotesque creatures.

Much like Infinity Blade, the game plays like a sword-fighting version of Punch-Out!!. After a few seconds of firing with a crossbow, enemies are then fought one at a time and player movement is limited to quick dodges rather than actual sidestepping during fights. The warrior can also block attacks, and retaliate with his sword.

As the man kills the monsters, he gets gold to buy better equipment and experience to make him a better fighter. He also starts to pick up journal entries and documents that tell the real reason why he is there. In short, many things are not what they seem in this abandoned hospital...