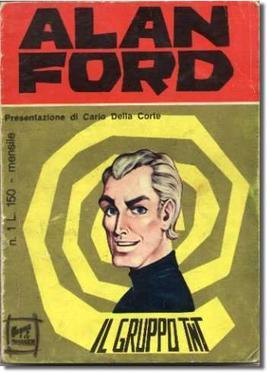 Alan Ford, also known as Alan Ford and Group TNT, is a long-running Italian comic book in the Spy Fiction and Black Comedy genres. It was created by writer Max Bunker (real name Luciano Secchi) and artist Magnus (Roberto Raviola, a prolific author who also did Satanik), and first published in 1969.

Set in a Deliberately Monochrome World of Ham, the comic tells of the wacky exploits of Group TNT, a non-government secret agency based in a dilapidated, flowerless flower shop on Fifth Avenue, New York City. They fight crime with no money, competence or regard to the law, yet are surprisingly effective and have a large, if silly, Rogues Gallery.

Around volume 427 (2005) the series takes a sharp turn and Group TNT officially disbands, though Alan, along with his newly acquired fiancé Minuette and Number One, opens a detective agency, from which the heroes' adventures continue undisturbed (as of this writing). Generally, about the first 200 volumes are considered to be "classics" and are published as such.

The main concept elaborated by Magnus and Bunker was a parody of James Bond, but lacking that hero's wealth, luck and gadgets. From the first volume onward, the comic book dabbled deeply in satire and tongue-in-cheek parodies of society, political parties, capitalism and typical spy fiction tropes, usually interspersed with running gags revolving around the members of the group and their antics. As the story proceeded, the comic book never strayed too far from the original humor, though sometimes racier material started to pop up in the story (for example, an entire arc set in Brazil has an almost-always-topless beauty as an important character).

Later on Magnus left the series in order to experiment with new styles and other authors took his place, namely Paolo Piffarerio and later Dario Perucca. Magnus would return to draw the 200th issue.

The comic was a success in Italy, but where it really hit it big was Yugoslavia, where thanks to Nenad Brixy's amazing translation it has been a cultural phenomenon since 1972, and continues to be in the successor states.

It also had a one-episode animated adaptation that can still be found (subtitled) on the net.

Now with a Character Sheet!

This work is absolutely Troperiffic, but mostly unknown in the English-speaking world, so tropers from Italy and the former Yugoslav states are welcome to add trope examples and anything else they can think of.

This Comic Book contains examples of:

Number One: "Horace, my old boy, I'm too old to assist you in this battle, but remember my advice: if you want to win, then you mustn't lose!"
Horatio: "Why thank you, old bone-sack! If it weren't for you I would have never thought of that..."