The Future Is Noir 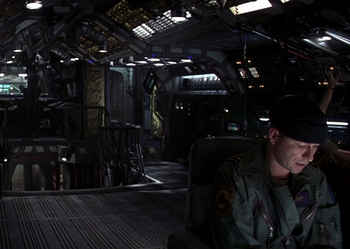 Let's hope the crew is brighter than the room.
Advertisement:

One thing that we know for certain about the future and of alien species waiting for us out in the universe: None of them have discovered the usefulness of adequate lighting. And in some cases, humans have forgotten it.

As the Cyberpunk movement took tropes from the gritty American detective/crime novels of the 1930s, so did films and TV shows take inspiration from the Film Noir of the same period (or based on it). Featuring darkness except for critically placed light, and often a single source of it for the entire scene, the look is dramatic. Unfortunately, in a serious case of Fridge Logic, it's pretty dumb when you think about it. Large open offices maintained in darkness except for the single desk lamps of the workers. Entrance ways and throne rooms in complete darkness but for the single row of spotlights down the middle. Looks cool, but you never see one of those deskbound workers getting up and running into the wastebasket because their vision is screwed up going from their light source into the surrounding darkness.

On alien ships, this is seen frequently to show how "alien" they are. Because aliens don't, you know, need to see anything. Or they see in a spectrum of light invisible to humans. Or they evolved from something nocturnal, making human-level illumination painfully bright to them.

There is a certain practical aspect to this: nothing hides cheaply-made sets and props better than poor lighting.

Another explanation is that energy-efficient lightbulbs have become much more popular in the future...

Contrast Crystal Spires and Togas, Shining City, as well as Everything Is An I Pod In The Future.

Alternative Title(s): We Will Not Use Adequate Lighting In The Future, The Future Is Darkly Lit, Tech Noir