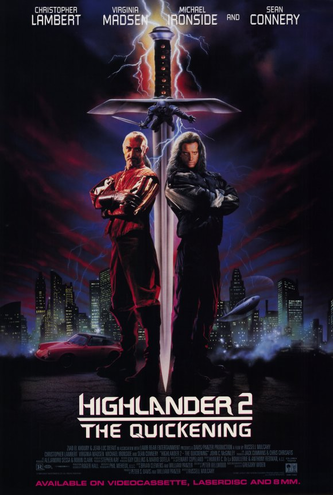 The past is now space. Or the other way around.
It depends on the version you are watching.
"Nicely played, MacLeod, but the game's not over yet."
— General Katana
Advertisement:

Continuing from Highlander, Connor MacLeod is now mortal... in the future! (2024, to be precise.) Now an old man on the verge of death, memories deep within him surface and remind him of his past in the planet Zeist, where a vengeful enemy, General Katana, plots to destroy him once and for all. One of Katana's plots fails big time, and MacLeod reverts back to his immortal state.

On top of that, the world has become a neofascistic nightmare controlled by the all-powerful Shield Corporation, whose primary asset is a powerful shield MacLeod built 25 years earlier when the ozone layer was depleting. When MacLeod learns of a Government Conspiracy to keep the shield functional despite the ozone layer having repaired itself, he allies with ecoterrorist Louise Marcus to destroy the shield. Katana uses the situation to his advantage and sides with the Shield Corporation and its corrupt cronies.