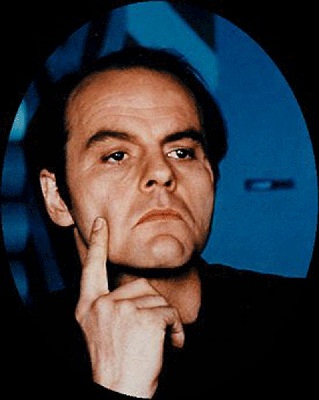 Ironside IS.
"I like to play bad guys, since good guys are always beaten up several times during the movie. Bad guys are beaten only once, in the end."
Advertisement:

Frederick Reginald Ironside (born February 12, 1950), known as Michael Ironside, is a Canadian actor and voice actor, hailing from Toronto. He is many things, tropers, but here... he is God.

Ironside is best known for playing military types, villains and anti-heroes due to his deep voice and his eyebrows setting off the Obviously Evil meter, a type he established in his breakthrough performance as the villainous telepath Darryl Revok in David Cronenberg's 1981 film Scanners; it was his character's Psychic Powers that resulted in the film's most famous moment. He also plays military officers or government agents in at least half of his roles, most notably as Sam Fisher from the Splinter Cell series.

His characters seem to have a strange recurring tendency to lose or damage their limbs, as evidenced here.

Ironside is a self-admitted lover of Science Fiction, Dune in particular.

Tropes in his roles include: