Film / The Falcon and the Snowman 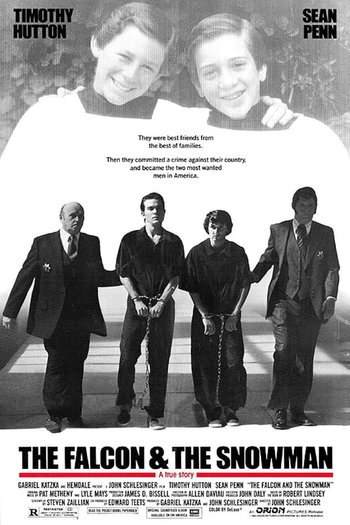 The Falcon and the Snowman is a fact-based 1985 espionage film directed by John Schlesinger, starring Timothy Hutton and Sean Penn.

Christopher Boyce (Hutton), the son of an FBI employee, gets a job with a defense contractor working with classified and sensitive information. Through that job, he reads a communiqué dealing with CIA plans to depose the Prime Minister of Australia. Disillusioned, he decides to provide the Soviets with U.S. government secrets as a form of punishment.

To further his plan, Boyce needs someone with experience in crossing borders and evading the authorities. He turns to childhood friend, small time drug dealer Andrew Daulton Lee (Penn). Lee, seeing the espionage as a business opportunity, gets greedy and creates problem for Boyce. Both of them are in over their heads.

Lee is arrested in Mexico City with undeveloped film and a postcard of the drop zone in his pocket. The Mexican police plan to charge him with the murder of an officer. Under torture he confesses to being a spy. Back in the United States, Boyce releases his falcon and waits for his own arrest.

The film also features David Suchet as Boyce and Lee's Soviet contact. Pat Metheny composed a spare jazz-based score, which includes the David Bowie collaboration "This Is Not America".

an HBO broadcast of the film in order to broadcast a message protesting the network's rates for satellite dish owners.