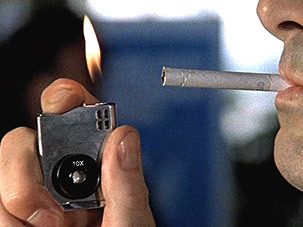 She said the man in the gabardine suit was a spy
I said "Be careful, his bowtie is really a camera."
— Simon & Garfunkel, "America"
Advertisement:

A classic element of any Spy Drama. The Spy Cam is a miniature camera hidden in mundane objects like briefcases or wristwatches, being used to take photos of secret documents or locations. Alternatively, the camera is not concealed at all but its small size enables it to be carried around and operated by the Double Agent without raising suspicion.

Subtrope of Shoe Phone. See Incredibly Obvious Bug for when this trope is parodied by featuring a camera that's bulky, noisy, covered in blinking lights, and all-around impossible to hide. Compare Surveillance Drone and Literal Surveillance Bug. Can be associated with Stalker Shot.