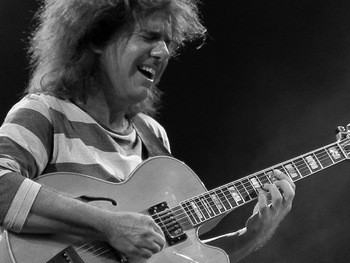 "A lot of jazz artists think people should like what they're doing just because it's jazz. I don't buy that."
Advertisement:

Patrick Bruce Metheny (born August 12, 1954) is a jazz guitarist from the Kansas City suburb of Lee's Summit, Missouri, United States. Though originally learning the trumpet from his grandfather, father and older brother, it was seeing The Beatles on television in 1964 that made him more interested in the guitar. His proficiency at guitar quickly translated to tutelage under well-respected jazz musicians, and a teaching position at both the University of Miami and at Berklee College of Music before the age of 20.

Metheny's debut album Bright Size Life was released in 1976, at the age of 21. Within a year, Metheny would meet pianist Lyle Mays, who would become a key collaborator for over 25 years. 1978 saw the debut of Pat Metheny Group, a contemporary jazz band that would later come to symbolize Jazz Fusion in the 1980s, incorporating elements of Americana, Brazilian popular music, New Age and smooth jazz. The Group would acquire 10 Grammy awards across its 27-year, 11-album career. (Metheny himself would garner 20 Grammys, the same number as Bruce Springsteen; and he maintains the record for both most consecutive wins in a category - seven - and most wins across different categories - also seven, including Best Rock Instrumental Performance and Best New Age Album.)

Elsewhere, Metheny released solo albums, as well as collaborations with other names in jazz, with vibraphonist Gary Burton, pianist Chick Corea, bassist Charlie Haden, drummer Antonio Sánchez and saxophonist Colin Potter among them. He's also had the fortune of working with Joni Mitchell (becoming part of her backing band for an elaborate 1980 tour), David Bowie (on "This Is Not America" from Metheny's score for the film The Falcon and the Snowman) and Steve Reich (who composed the much sampled "Electric Counterpoint" for Metheny.)

Metheny's musical style is greatly influenced by Bill Evans, Wes Montgomery, Miles Davis and The Beatles. At the beginning of the 1980s, Latin and Brazilian music also heavily influenced his compositional style. His signature guitar tone is of a hollow-body electric guitar (formerly, a Gibson ES-175, now replaced by various Ibanez signature models)—reminiscent of Wes Montgomery, but not quite as dark; up until the 1990s, he was a fond user of digital chorusing and reverb effects to provide extra space. However, his sounds over the years include: altered tunings on 6 and 12-string acoustics and electrics, the Roland GR-300 Guitar Synthesizer—which Metheny used to give his guitar a timbre equivalent to that of a trumpet, the Synclavier digital synthesizer workstation, and he also owns a Pikasso guitar created by Canadian luthier Linda Manzer; it contains 42 strings across two guitar necks and two autoharp sections.

During the revival of smoother/kitschier 80s sounds in the 2010s, many have come out on record stating that Metheny's music has been instrumental in finding success in their own fields, from dance producer Todd Terje and drum and bass producer Goldie, to guitarist Thurston Moore and ambient composers CFCF and The Orb. An amusing anecdote about Metheny comes from famed television producer Chuck Lorre: Lorre was invited to audit a guitar course at the University of Miami, as he was a working musician at the time. Metheny was introduced to him as the "guest educator" for that course and Lorre had his world abruptly destroyed upon hearing a 16-year-old Metheny play. Lorre credits his later switch to television to this moment, and his entire anecdote

appeared on one of his signature Vanity Plates after an episode of The Big Bang Theory.

Tropes in his life and work include: