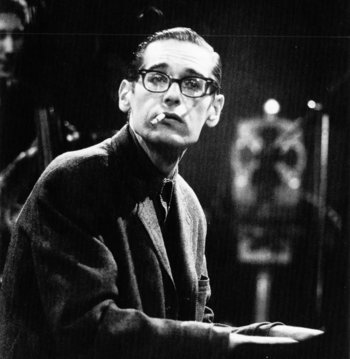 William John Evans (August 16, 1929 – September 15, 1980) was a jazz pianist and composer, considered to be one of the greatest and most influential of all time. He is best known for his work with Miles Davis in the development of Modal Jazz and later in his own trios which redefined the role of a jazz rhythm section. He was classically trained and it shows: his playing incorporated contrapuntal and textural techniques from the classical piano repertoire and although he could play hard if he wanted to, his famous group recordings tend to feature collective interplay rather than soloing against a rhythm section.

Many of his pieces (most notably "Waltz for Debby") have become standards of the repertoire for jazz pianists and his playing style has influenced numerous pianists to this day. He has been nominated for 31 grammys, winning 7 of them, and was inducted into the Down Beat Jazz Hall of Fame in 1981.

Bill Evans and his music provide examples of the following tropes: