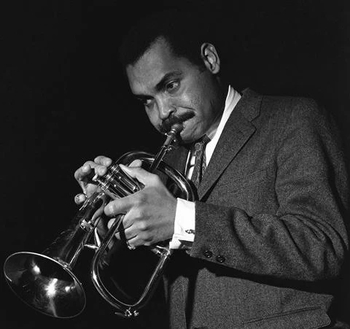 Arthur Stewart "Art" Farmer was an American jazz trumpeter and flugelhorn player. Noted for his playing style, he created trumpet solos that relied heavily on lyricism and form. He became one of the most versatile improvisers of his generation. While elements of Farmer’s work were likened to the bebop of masters Dizzy Gillespie and Fats Navarro, Farmer abandoned bebop’s dramatic high notes and complexity to concentrate on pure melody. Giving his playing a warm timbre and a melodic approach to phrasing.

He also played a major part in creating a trumpet–flugelhorn hybrid, the flumpet

, which was constructed for him by theinstrument maker David Monette. This instrument allowed him to play with more expression in a range of settings, from small groups to big bands.

He would die in 1999 of a heart attack. However, not without influencing countless modern trumpeters such as Roy Hargrove and Arturo Sandoval.