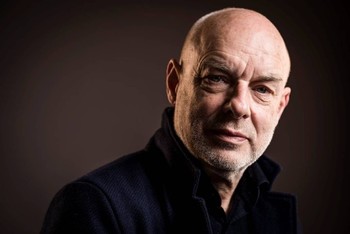 "So tired, soul searching, I followed the sounds to a cathedral
Imagine my surprise to find that they were produced by Brian Eno"
—MGMT, "Brian Eno"

Brian Peter George St John le Baptiste de la Salle Eno (born Brian Peter George Eno, May 15, 1948) is an enormously influential and prolific musician, composer, Record Producer, singer and music theorist, even though he describes himself as a "non-musician." A former art school student, Eno has an enormous amount of credits under his belt that includes his popularisation of ambient music, sampling, and world music, his co-authoring of the "Oblique Strategies

" collection of cards alongside Peter Schmidt, his groundbreaking use of the studio as an instrument, his critically acclaimed solo career, his well-regarded work as a Record Producer, his stint in the glam rock band Roxy Music and his creation of the "Microsoft Sound."

Eno's interest in recording technology and experimental approaches can be traced to his studies at Ipswich Art School and the Winchester School of Art, but he had little actual musical training when he joined the glam rock band Roxy Music in 1971. Credited solely as "Eno," he provided synthesiser work, occasional backing vocals and "treatments", operating the mixing desk, tape recorders and serving as Record Producer. He left the band in 1973 over a creative conflict with frontman Bryan Ferry, taking his weirdness with him.

Eno started a solo career almost immediately, bringing a ton of guest musicians in the studio that included all his old Roxy bandmates sans Ferry (Phil Manzanera, Andy MacKay, Paul Thompson,) John Wetton and Robert Fripp from King Crimson, Simon King from Hawkwind and Paul Rudolph of The Pink Fairies — an ensemble specifically chosen for its musical incompatibility. The resulting hodgepodge of humorous Word Salad Lyrics, catchy rock melodies and experimental touches made Here Come the Warm Jets a notable success. He continued this experimental rock sound for a string of similarly-acclaimed albums, Taking Tiger Mountain (By Strategy), Another Green World and Before and After Science, featuring just as many guest musicians pooled from famous bands as before.

Simultaneously, Eno entered into a long True Arty collaboration with Robert Fripp based around a tape-delay system nicknamed "Frippertronics" and minimalist influences. Eno and Fripp released three albums together: (No Pussyfooting), the first, had exactly one 18-minute track per side. The minimalist direction of these albums along with an apocryphal story about staying in the hospital, eventually drove Eno to abandon rock and dedicate himself to ambient music, releasing another series of acclaimed albums starting with Ambient 1: Music for Airports which are considered landmarks of the genre. Since then, his solo music has largely been electronic and ambient in nature.

Ever since his career began, Eno has split his time between working by himself and acting as a Record Producer. In the latter capacity, he is known for applying his experimental approach in the studio and encouraging a band's creativity. His production work includes, among others:

He contributed heavily to David Bowie's "Berlin trilogy" (Low, "Heroes", and Lodger), to the point that he and producer Tony Visconti are considered the architects of those albums' sound (and Eno is often mis-credited as co-producing those albums; he did, however, produce Bowie's later album Outside). He also released two critically acclaimed collaborations with David Byrne, My Life in the Bush of Ghosts and Everything That Happens Will Happen Today, and co-produced Byrne's 2018 solo album American Utopia. His involvement with the music industry is so deeply entrenched that his Wikipedia article once included a detailed web diagram showing off just how many connections he has with other Progressive Rock artists alone; he's that prolific.

In short, Brian Eno is awesome and you should listen to him.

With Robert Fripp (of King Crimson):

With U2 (as Passengers):