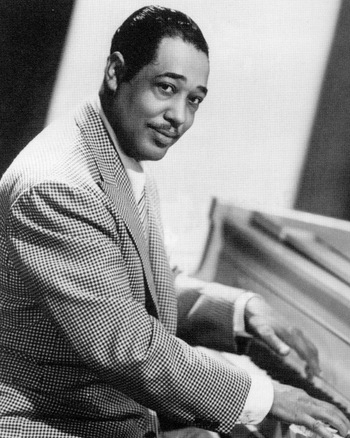 "There are two kinds of music. Good music, and the other kind."
— Duke Ellington
Advertisement:

He hailed from a middle-class family in Washington, D.C., and learned piano both from lessons and from imitating the ragtime pianists in the community. After attaining modest success in DC as a pianist and jazz band leader, Duke sought the big time by taking his band to New York City, the center of the music world and the most glamorous scene of The Roaring '20s. He first played in the Kentucky Club, then the Cotton Club, honing his songwriting chops and gathering more musicians around him until he was no longer leading a band but an orchestra. During the 1930s and 1940s, as Big Band swing grew in popularity throughout the US and the world, Duke's jazz orchestra became renowned as one of the best.

In the late 1940s and 1950s, big bands and swing precipitously fell out of popularity. note Basically, the serious jazz fans and up-and-coming jazz musicians abandoned it for bebop, while the dancers and teens abandoned it for pop music (including crooners like Frank Sinatra) and, later on, rock and roll. Not helping were swing's association with bad memories of World War II and a couple of strikes by the musicians' union in 1942-44 and 1948 which prevented big bands from recording but not their singers, prompting many to go out on their own, most famously Sinatra. Duke's orchestra was one of the few that managed to stay afloat—and even so, the band mainly survived off the royalties from their prior compositions.

However, soon enough time had passed for the Popularity Polynomial to swing back in Duke's favor, setting the stage for a comeback. At the 1956 Newport Jazz Festival, the band's performance of "Diminuendo and Crescendo in Blue"—particularly Paul Gonsalves' 27-chorus saxophone solo in the middle—stirred the crowd to wild dancing, then pandemonium. A month later, Duke's face was on the cover of Time magazine. Duke and his orchestra were now even more renowned than they'd been at the height of the swing era, and this resurgence in popularity lasted until Duke's death in 1974.

During this period, Duke continued to innovate, albeit within the swing idiom, writing new material and rearranging old material to keep it fresh. He incorporated "world music" influences on albums like The Far East Suite and The Afro-Eurasian Eclipse, and incorporated church music into his Sacred Concert series. At the encouragement of producer Bob Thiele and various labels, Duke teamed up with other big names in jazz—Louis Armstrong, John Coltrane, Count Basie, Coleman Hawkins, Charles Mingus, and Max Roach—to record albums.

Throughout his career, Duke sought out what he called "individualists", musicians who weren't just technically proficient with their instrument, but whose playing was one-of-a-kind. (In this regard, he was inspired by the examples of Louis Armstrong and Sidney Bechet—Duke once expressed a desire to have Louis play every instrument for his band, if it were possible.) A few of the individualists who played with Duke were trumpeters James "Bubber" Miley, Cootie Williams, and Ray Nance (who also played violin); trombonists "Tricky Sam" Nanton and Juan Tizol; saxophonists Ben Webster, Johnny Hodges, and Paul Gonsalves; bassist Jimmy Blanton; and vocalist Ivie Anderson. Billy Strayhorn was also particularly noteworthy for his serving as the band's secondary pianist and Ellington's partner in songwriting. Ellington and Strayhorn had a knack for writing or arranging songs tailored specifically for the strengths of the musicians; it was noted that musicians tended to play better under Duke than on their own. Ellington's work schedule was also affected because he was almost continuously touring, giving him little time to finish many of the things he started, so he'd get Strayhorn to finish them instead, which Strayhorn was happy to do. Duke also treated his musicians well. He liked to joke "I've discovered a gimmick: I give them money", but he also acted as their promoter, agent, biggest fan and general father figure, and they, in turn, adored him, for the most part. As a result, the musician turnover rate in his orchestra was remarkably low. Consider Cootie Williams, who made his name with Ellington in the '30s but left in 1940, when the band was at the peak of its powers. Ellington's only comment was "He'll be back", and 22 years later, Williams did indeed come back, and stayed until after Ellington's death.

Duke and Strayhorn also composed and performed music for theater and film. The most famous of these soundtracks, Anatomy of a Murder, was notable for being a historic breakthrough—the first African-American compositions used as non-diagetic music in a major Hollywood film.

When asked during his return to fame what was good music, he replied: “If it sounds good and feels good, then it IS good!” which became known as Duke Ellington's Law.

His ghost now lives in a teenage boy's attic.

For Ellington's complete discography, see the other wiki.

Notable songs associated with the band
By Duke Ellington