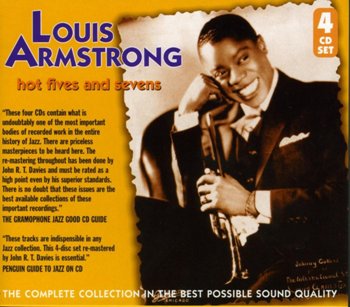 Well, alright, why is life worth living? That's a very good question. Well, there are certain things I-I guess that make it worthwhile. Uh, like what? Okay. Um, for me ... uh, ooh, I would say ... what, Groucho Marx, to name one thing ... uh, ummmm, and Willie Mays and um, the second movement of the Jupiter Symphony, and ummmm... Louis Armstrong's recording of "Potato Head Blues" ... umm, Swedish movies, naturally ... "Sentimental Education" by Flaubert ... uh, Marlon Brando, Frank Sinatra ... ummm, those incredible apples and pears by Cézanne ... uh, the crabs at Sam Wo's ... uh, Tracy's face.
— Woody Allen in Manhattan (1979).
Advertisement:

The Complete Hot Five And Hot Seven Recordings is a 2000 compilation album collecting all the recordings made by Louis Armstrong and his Jazz band The Hot Five and The Hot Seven between 1925 and 1927. The four-CD set is of great historical importance as these recordings laid the foundation for not only Jazz, but much of modern music we know today. They are full of beauty, creativity and innovation. "Heebie Jeebies", for instance, introduced scat singing and Armstrong's solo on "Potato Head Blues" helped establish the stop-time technique in jazz. Furthermore the sessions are famous for "West End Blues", one of the most celebrated recordings in musical history.

The recordings were added to the National Recording Registry in 2002, as one of their first additions.