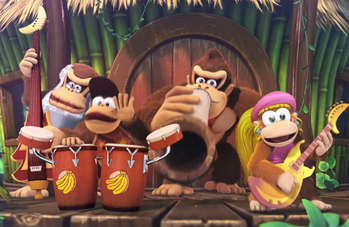 Now I'm the king of the swingers, oh,
The jungle V.I.P.
I've reached the top and had to stop
And that's what's botherin' me!
— King Louie, "I Wan'na Be Like You

As with most settings, jungles tend to have certain types of music associated with them. Think of a jungle, and you might imagine tribal drums, maybe some exotic instruments like the panflute or kalimba... but sometimes, you get swingy and brassy music instead.

Perhaps this is because jungles are perceived as colorful and diverse environments, which makes them conducive to some fun and catchy jazz. Expect to see jungle animals such as monkeys, birds, elephants, or others as musicians. When animal musicians appear, an elephant will likely play on its trunk like a trumpet or saxophone, and monkeys or apes will drum on tree trunks, coconuts or their own chest. A crocodile's teeth may be played like a xylophone. "Swing" is both a type of jazz, and what monkeys and apes do on vines.

The association may also have something to do with how in the 1920s and '30s, some racists dismissed all jazz as "jungle music", and jazz bands responded by owning that particular nickname. Of course, the romanticized notion of the jungle was also pretty popular at that time (see for example King Kong (1933) and the Tarzan films), so jazz bands and Tin Pan Alley songwriters were more than happy to milk that trend for all it was worth. Jazz music may also be associated with jungles because it was created by musicians of African descent, whose original homeland is stereotypically imagined as untamed tropical wilderness. This trope may overlap with Creepy Jazz Music if it is associated with that kind of jungle, and if the music sounds fittingly scary, but more often this music is kind of fun and frolicking.