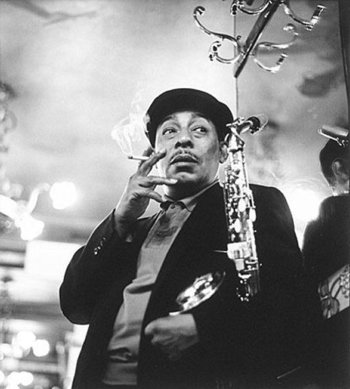 Cornelius "Johnny" Hodges (July 25, 1907 – May 11, 1970) was an American saxophonist best known for two things: his long tenure in the orchestra of Duke Ellington, and pretty much being the embodiment of the Sexophone. Although his influence on jazz, and the saxophone in particular, was not as groundbreaking or far-reaching as his contemporary, Charlie Parker, Hodges was nonetheless deeply respected for his virtuosity, melodic improvisational ability, and luscious tone.

Hodges was born in Massachusetts, and grew up with future fellow Ellington alum Harry Carney (Ellington's long-time baritone saxophonist). His introduction to music came on the piano, which he largely taught himself. He picked up the soprano saxophone in his teens, at which time he picked up the nickname "Rabbit." The young Hodges was greatly influenced by the famed (and temperamental) early saxophonist Sidney Bechet.

By 1928, Johnny Hodges had joined the Duke Ellington orchestra, where he would make his name. Hodges would serve as Ellington's lead alto player for most of his subsequent career, along with stints leading his own big bands and as a solo artist. He was greatly respected by legendary saxophonists Ben Webster and John Coltrane, while Charlie Parker dubbed him the "Lily Pons

Following his death by heart attack in 1970, Ellington eulogized his longtime friend and collaborator, "Never the world's most highly animated showman or greatest stage personality, but a tone so beautiful it sometimes brought tears to the eyes—this was Johnny Hodges. This is Johnny Hodges."