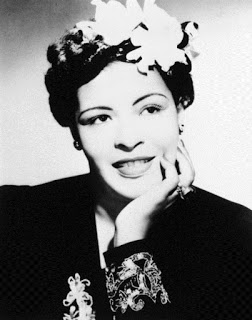 "With few exceptions, every major pop singer in the US during her generation has been touched in some way by her genius. It is Billie Holiday who was, and still remains, the greatest single musical influence on me. Lady Day is unquestionably the most important influence on American popular singing in the last twenty years."
— Frank Sinatra, interview in Ebony, 1958
Advertisement:

Eleanora Fagan (April 7, 1915 – July 17, 1959), known professionally as Billie Holiday and nicknamed "Lady Day", was a popular jazz singer. Her early life was tragic and her drug abuse cut her life short, but she remains famous for her powerful yet vulnerable voice, her persona, and her fearless advocacy of civil rights with such songs as the anti-lynching ballad "Strange Fruit" (which took considerable courage to record, seeing as how it predated the Civil Rights Movement by two decades). She was bisexual and had flings with both men and women.

She's also notable for her definitive performances of such standards as "Summertime" and "Easy Living".

Albums by her with their own page on TV Tropes: