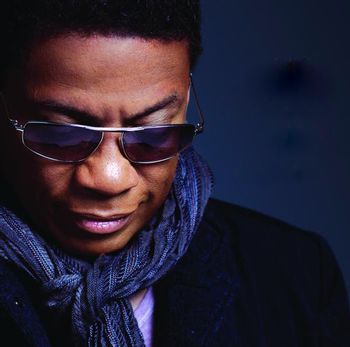 "Music happens to be an art form that transcends language."
Advertisement:

Herbert Jeffrey Hancock (born April 12, 1940) is a famous Jazz pianist from Chicago, known for being one of the genre's most important musicians and for his eclectic style.

A classically-trained pianist, Hancock began his career with the solo album Takin' Off in 1962, the source of his Signature Song "Watermelon Man". However, his career really took off once he joined Miles Davis' "second great quintet" a year later, where he stayed until 1968. In the quintet, he developed his signature style and started incorporating elements of rock music (especially towards the end).

After being kicked out of the quintetnote officially for staying too long in Brazil on his honeymoon; the real reasons we can't really guess, Hancock restarted his solo career. He proved to be just as experimental and wide-ranging as his mentor Davis, incorporating Funk, rock and Soul into his music and becoming the first jazz musician to fully embrace synthesizers and electric keyboards. With his 1973 album Head Hunters, he helped pioneer jazz fusion and obtained another Signature Song, "Chameleon". He continued to mine that particular vein through Thrust, Man-Child, Secrets and Mr. Hands until the 80's, in the meantime still producing acoustic works alongside such giants as Chick Corea.

He moved in a more pop-oriented direction in the late seventies (which is frequently regarded as a Seasonal Rot by fans and critics) first with the not quite commercial but very much vocalized Sunlight (five songs, the three sung ones being respectively 9, 8 and 7 minutes long). He definitely started dabbling the commercial stuff first with Feet Don't Fail Me Now, followed by the Roy Tempterton-autored Lite Me Up surfing the ill-fated disco-pop wave far too late.

After a short desert walk, he found new life in an electronic-industrial style alongside Bill Laswell in The '80s, when he relased Future Shock (1983), which gave him another big hit, "Rockit". This streak lasted for Sound System and then Perfect Machine, with the usual diminishing returns. After trying his hand again at fusion with the acid jazz infused Dis Is Da Drum which went largely unnoticed. Since then, he has returned to his more acoustic roots with success as he won a Grammy in 2007 for his album of Cover Versions River: The Joni Letters as well as several nominations for the similar Gershwin's World.