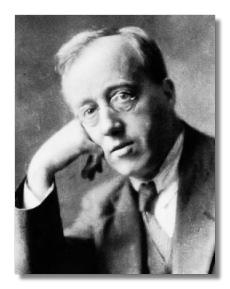 "Never compose anything unless the not composing of it becomes a positive nuisance to you."
Advertisement:

Gustav Theodore Holst (21 September 1874 - 25 May 1934) was an English composer (of Swedish and Latvian descent) of the late 19th to early 20th century. He suffered from neuritis, so he had significant difficulty with his right-hand motor skills. This shattered his childhood dream of being a concert pianist. Holst is most notable for his orchestral Suite The Planets, a composition that became very popular and would go on to influence many of the composers and musicians of the 20th century.

The music of "I Vow To Thee, My Country" is derived from the section "Jupiter" of The Planets, by the way, so you most certainly have heard of Holst's work if you're in Britain or other Commonwealth countries.