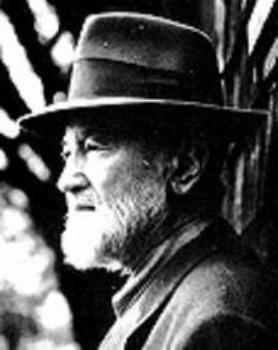 "My God! What has sound got to do with music?"
— Charles Ives
Advertisement:

Charles Edward Ives (October 20, 1874 – May 19, 1954), was an American composer, organist, and insurance salesman. He is regarded as one of the leading composers of American modernism in music. Born in Danbury, Connecticut, he was taught music by his father George Ives, a bandmaster with an apparent love for musical "experiments." Ives then studied composition under Horatio Parker at Yale University, where he was also a member of the Delta Kappa Epsilon fraternity.

He made his living for the most part in insurance while composing on the side, and remained rather obscure until the premiere of his second piano sonata, known popularly as the Concord Sonata, in 1939 by John Kirkpatrick - By then Ives was 65. This brought a sudden interest in Ives's earlier works, and he came to be regarded as one of the great experimenters of his age.

Along with his many songs and shorter pieces, his major works include Piano Sonata No. 2 (Concord, Mass., 1840-1860), Three Places in New England (Orchestral Set No. 2), Central Park in the Dark, The Unanswered Question, and his Fourth Symphony. They are characterized by a complex style, often employing elements of polytonality, tone clusters, polyrhythm, and occasionally quarter tones. Ives is well known for quoting tunes from his childhood - band marches, hymns, American folk tunes and popular music, including the songs of Stephen Foster. There are also references to classical composers such as Ludwig van Beethoven.

A good way to understand his complicated style of dissonance and quoting of multiple pieces is to think of his childhood, and how he would have first experienced music. As noted above, his father was a bandleader in late 19th century America. Now imagine him as a child in the middle a public park, going to hear his father's band play on the Fourth of July. Being a major celebration, however, three other bands in three other areas of the park are also playing at the same time. Ives's compositions reflect this muddled aural experience.

In addition to American and European music, Ives was influenced by literature and philosophy: the transcendental writers of Concord, Massachusetts served as the subject of the Concord Sonata, and the movements are named so: "Emerson" (after Ralph Waldo Emerson), "Hawthorne" (Nathaniel Hawthorne), "The Alcotts" (Bronson and his daughter Louisa May Alcott), and "Thoreau" (Henry David Thoreau).