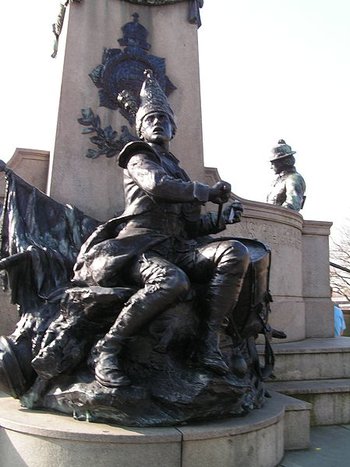 , licensed under Creative Commons
"They had three cadences, these spectral drummers, which they called First Kings, Second Kings, and Revelations. Going into a fight, they went from one cadence to another with no apparent signal until the officers began to shout commands and men began to fall. Then the drummers began a solemn drill beat that Bushrod believed would be the muttering undertone of every nightmare he would ever have."
— Howard Bahr, The Black Flower: A Novel of the Civil War
Advertisement:

Drums are often used to indicate that war is on the move. Armies march to the beat of a drum; scouts communicate with their commanders by means of coded drum-beats; the enemy may use their drums as an intimidation factor on the town they're besieging.

Truth in Television, as infantry marching in formation often use the beat of a drum to keep time and ensure their steps are even. Many cultures, both ancient and modern, have martial traditions based around drums, and often had specialized drums created for the express purpose of battle.

The association of drums with violence may be a contributor to the All Drummers Are Animals stereotype. If the drums are being used to harass or annoy someone, it's Loud of War. If the sound of the drums itself causes harm, that's a Brown Note. If someone is getting hit with a drum, it's either Improbable Weapon User or Improvised Weapon. If someone uses their weapon to hit their shield like a drum, it's Shield Banging.