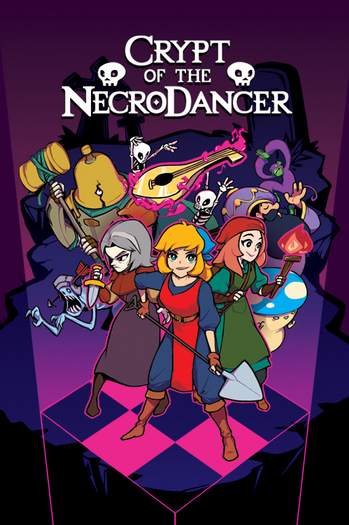 Rise from your grave... and get down on the dance floor!
"My pulse is beating like a drum, but my blood is running cold... I'm not sure what's going on, but I came here with a question.

And I'm gonna find the answer if it kills me."
— Cadence
Advertisement:

Cadence is digging up a grave when suddenly the ground opens up. She falls deep into the catacombs and lands back first on a rock. Unbeknownst to her, a mysterious and sinister figure known as the NecroDancer rises from the earth and steals her heart. Unsure as to what happened, as she feels an unwavering beat, she sets out to find the answers.

Crypt of the NecroDancer is a Roguelike/Rhythm Game developed and published by Canadian independent studio Brace Yourself Games that has music-player game options, to create a rather unique combination. The game was released as an early-access on June 30th, 2014 and saw a full release on April 23rd, 2015. The music was composed by Danny Baranowsky, who also worked on the soundtracks of Super Meat Boy and The Binding of Isaac.

In Crypt of the NecroDancer, your character can only move and fight to the beat of the music. The goal is to fight and dance your way through a procedurally-generated dungeon, slaying monsters as you go along. You're encouraged to maintain the rhythm to obtain a coin multiplier, and missing a beat or taking damage resets it. Though enemies travel in predictable patterns, the fast pace of the game makes it very challenging.

A spin-off sequel, titled Cadence of Hyrulenote Full title: Cadence of Hyrule - Crypt of the NecroDancer feat. The Legend of Zelda was released on June 13, 2019. A crossover with Nintendo's The Legend of Zelda series, the game has Hyrule under the spell of a mysterious court musician named Octavo. With Link and Zelda under a deep slumber, the Triforce summons Cadence (who had recently managed to escape the crypt), to awaken the heroes and help the duo to stop Octavo's army of monsters and the pulsing rhythm that controls them.

A direct sequel titled Rift of the NecroDancer is currently in development.