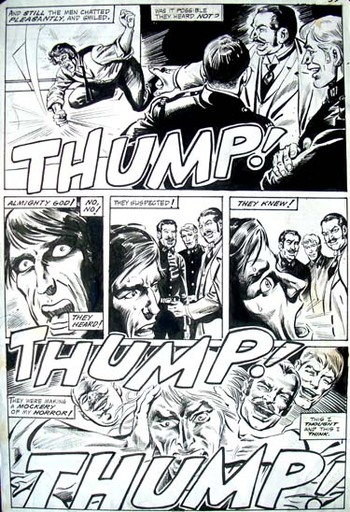 "Will it stop, Doctor? The drumming. Will it stop?"
— The Master, Doctor Who, "Last of the Time Lords"
Advertisement:

A character goes mad from a sound that only they can hear. Because of this, they may go Ax-Crazy and try to destroy the source of the sound, or at least what they think is the source of the sound — or end up resorting to Headphones Equal Isolation, abandoning the world in favor of just getting away from the horrible noise.

Perhaps the Trope Maker is The Tell-Tale Heart, where the narrator goes mad from the sound of a dead man's heart beating. "Ticking" allows for Alliterative Name. The noise of a clock ticking is a very common motif - especially if it underlines a theme of time running out. Other popular motifs include a noise like someone (or something) breathing, very distant music, some extremely annoying sound such as scraping or scratching, or a heartbeat. Another possibility is for new telepaths to go mad from all the voices around them.

Compare Brown Note (where anyone can hear the sound) and Out, Damned Spot! (the visual version of this trope). And, of course, Hearing Voices, which is technically a subtrope. Unrelated to Why Am I Ticking?, which is terrible for a different reason.