Why Am I Ticking? 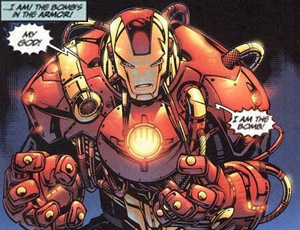 Tony admits that, knowing how to have a blast, he was quite the bomb at parties.
Advertisement:

A character unwittingly becomes a walking, talking bomb through Applied Phlebotinum. They can have explosive devices implanted in them by the villain, or in other cases, they are the bomb due to applications of combustive or out-of-control super powers.

Whichever way, they're extremely hazardous to the health of the people around them, made all the more urgent by the fact that they may not even know that they're the threat.

In Video Games, this type of effect is frequently employed by bosses (and sometimes by players) as a Herd-Hitting Attack. Expect Ludicrous Gibs if the character blows up.

Not to be confused with Action Bomb, which is when a character blows themselves up as a form of attack. See also Explosive Leash and Strapped to a Bomb. May take the form of a Typhoid Mary, Walking Wasteland, and/or Poisonous Person. When used by a villain, it has a high chance of being their Moral Event Horizon. If the ticking is literal, it may be due to playing Grenade Tag with a Sticky Bomb. If overhearing it affords others a chance to run for cover when the walking bomb approaches, this trope overlaps with The Croc Is Ticking.