Series / Captain Power and the Soldiers of the Future 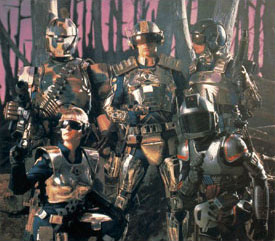 "Earth, 2147: The legacy of the Metal Wars, when man fought machine - and machines won.
BioDreads: Monstrous creations that hunt down human survivors and digitize them.
Volcania: Centre of the BioDread Empire, stronghold and fortress of Lord Dread, feared ruler of this new order.
But from the fires of the Metal Wars arose a new breed of warrior, born and trained to bring down Lord Dread and his BioDread Empire. They were Soldiers of the Future, mankind's last hope!
Their leader: Captain Jonathan Power, master of the incredible powersuits which transform each soldier into a one-man attack force!
Major Matthew "Hawk" Masterson, fighter in the sky!
Lieutenant Michael "Tank" Ellis, Ground Assault Unit!
Sergeant Robert "Scout" Baker, Espionage and communications!
And Corporal Jennifer "Pilot" Chase, Tactical Systems Expert!
Together, they form the most powerful fighting force in Earth's history.
Their creed: To protect all life! Their promise: To end Lord Dread's rule!
Their name....CAPTAIN POWER AND THE SOLDIERS OF THE FUTURE!"
Advertisement:

There were a number of experiments in interactive TV in the late 80s, such as a murder mystery where viewers called in between acts to vote on who would turn out to have dunnit. One of the more radical experiments in interactive television was Captain Power And The Soldiers Of The Future. The story followed the adventures of Captain Jonathan Power and his team of freedom fighters on a post-apocalyptic Earth where civilization has been destroyed by Lord Dread's robotic armies. Fortunately, Captain Power and his team have the ability to transform into armored super-soldiers by touching their power suit's insignia and saying, "Power on."

The show was a relatively early TV example of dystopian Cyberpunk, and, though ostensibly aimed at children, was so dark and violent many parents complained to Mattel about the Anyone Can Die nature. J. Michael Straczynski, Larry DiTillio, New Teen Titans creator Marv Wolfman, veteran novelist and scriptwriter Michael Reaves, and Marc Scott Zicree of The Twilight Zone Companion and Magic Time fame worked on the show, and Howard the Duck creator Steve Gerber was slated to write for the unproduced second season. Mattel pulled the plug on the show after the season one finale, as the producers wanted to go into even more of a Darker and Edgier direction which would've thrown off the Merchandise-Driven aspect of the show even further.

The show's main draw was the merchandise interactivity. Captain Power action figures interacted with electronic toys based on the show's transformation booth, fighter jets, and other hardware. These could interact with each other: the jets fired a strobe of light which a receptor on another jet could register as a hit. The toys could also interact with the show itself: various things in the show emitted a strobe effect which would register on the toy. Villains and heroes had strobes which the jets would register as targets, weapons fire emitted a yellow strobe that would register as a hit (and viewers were gently reminded that hiding the jets behind their backs was cheating). The "power on" sequence would both reset the damage count on a jet, and activate the "power on" cycle in the transformation booth toy. At the end of each episode, one of the characters would step through the Fourth Wall to tell viewers what constituted a good score.

Around the same time as the show's release, three animated videos were released, Future Force Training, Bio-Dread Assault, and Raid On Volcania, which fans could train on between episodes. These featured the viewer as a new recruit, designated "Pilot-1", who received training from the captain himself in piloting the XT-7 fighter, and undertook some dangerous missions. These episodes were animated by AIC, one of the companies responsible for Bubblegum Crisis and many other anime of the late 80's.

The series celebrated its 25th anniversary in 2012 with a long-awaited DVD release. In late 2012, executive producer Gary Goddard announced that a revival of Captain Power was beginning development under the name Phoenix Rising. Judith and Garfield Reeves-Stevens have been tapped as showrunners. As of 2022, the reboot is either deep in Development Hell or more likely cancelled, with Goddard out of the picture entirely

Captain Power and the Tropers of the Future!