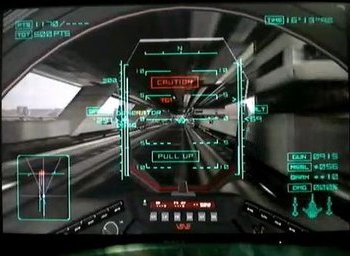 Mobius One, It's Up to You to fly down this tunnel. And don't give me lip about Violation of Common Sense.
"The approach will not be easy. You're required to maneuver straight down this trench and skim the surface to this point."
— General Jan Dodonna, Star Wars Episode IV: A New Hope
Advertisement:

The Impossible Mission, but with Cool Planes. Other vehicles in other mediums may be used (spaceships in space, submarines underwater, etc) if necessary. In any case, the impossibility of the mission comes from the fact that the vehicle in question is forced to operate in an environment it wasn't designed for. Instead of soaring through the open skies, the Cool Plane will be forced to maneuver through a narrow canyon; the spaceship will be in an Asteroid Thicket, near an Unrealistic Black Hole, or through the guts of a massive ship or space station; the submarine will be forced to operate at (or beyond) its maximum diving depth. Basically, our heroes are forced to take a route that would be a bad idea at the best of times, much less under enemy fire, on a time limit, with dire consequences for failure. For additional entertainment, the path will often destroy itself as it's being travelled.

A common form of The Climax. Done well, it shows off the main character's courage, resolve, and Improbable Piloting Skills, allows them to defeat the Big Bad in one fell swoop, and provides plenty of chances for visual effects. Rather than trying to top this, it's often best to just put it at the end of the story and wrap things up as soon as it's over. Compare Aerial Canyon Chase when this trope plays out as a chase scene.

Since The Dam Busters, or rather, A New Hope's homage to 633 Squadron for the fight against the Death Star, there has been an increasing chance such missions will require flying through a canyon, shaft, city, or other form of trench or absurdly long and spacious corridor to reach the target.