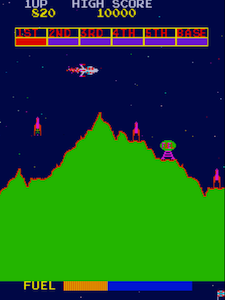 HOW FAR CAN YOU INVADE OUR SCRAMBLE SYSTEM?
The 1981 Arcade Game Scramble was Konami's original Horizontal Scrolling Shooter; it was one of the first games in the genre, along with SNK's Vanguard.
Advertisement:

The player flies a jet fighter armed with lasers and bombs to fire at enemy rockets and flying saucers, trying to avoid colliding with them or the terrain. Hitting fuel tanks not only scores a few points but replenishes your ever-dwindling fuel supply. After five levels, the player flies into the base of the enemy system and destroys a target, after which the game loops with higher difficulty.

A sequel, Super Cobra, was released the same year, with the player now in control of a helicopter and carrying away a suitcase at the end instead of bombing a target. There were now ten levels before the base and the garishly colored backgrounds were slightly more textured, but otherwise the arcade versions of Scramble and Super Cobra looked and played pretty much the same.

In the west, both games were licensed by Stern Electronics for arcade distribution. Super Cobra was ported more widely than Scramble in the 1980s, but Scramble has since turned up more frequently on Compilation Rereleases of Konami's older games, including remade versions on the Game Boy Advance and Xbox Live Arcade.

Scramble was retconned into the Gradius series in Gradius Generations.note The first Gradius game was codenamed Scramble 2 before its final product release.

Tropes in Scramble and Super Cobra: