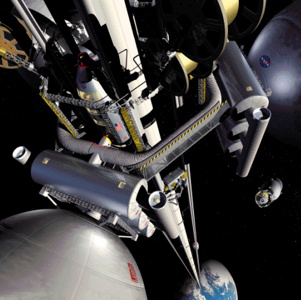 Going up...
"In one moment, Earth; in the next, Heaven."
— Academician Prokhor Zakharov, Sid Meier’s Alpha Centauri
Advertisement:

A concept that gets kicked around a lot in Speculative Fiction as well as among real-life futurists. Exactly What It Says on the Tin: an elevator riding up into space on a cable stretched from Earth into orbit.

Physics dictates the placement. It would need to be placed on the equator, and stretch up in such a way that the center of mass for the system was beyond the geosynchronous orbit level. That means at least 22,000 miles up. Hope the music doesn't suck.note To be honest, you could do worse than one of the great classics of bossa nova, but some variety would be nice...

The best materials science we have today tells us that the only known material with a high enough strength-to-weight ratio would be carbon nanotube cable. We so far don't have the ability to manufacture it in the lengths needed. Other theoretical methods include dynamic-support, essentially a stream of magnetized bullets whose momentum pushes up the cable. The idea is surprisingly plausible from a physics standpoint, is evident in medium-hard sci-fi, and would, once the construction cost was paid off, reduce the cost of putting payloads into orbit. It's been said that we could have a working space elevator about 50 years after everyone stops laughing. Most of them have.

Many works of fiction suggest building a prototype on the Moon or Mars (before tackling Earth), as the lower gravity makes it easier (and safer in case something goes wrong). Those suggesting Mars are reasonable, although there is a moon between the Martian surface and synchronous orbit. On the plus side, there is a second moon just outside synchronous orbit, which would be handy to use as material to make the elevator. A lunar space elevator would need to connect to either the L1 or L2 Lagrange points

of the Earth-Moon system, requiring it to be several times longer than its terrestrial counterpart, but the Moon's low gravity means it's still possible with current materials.

These are sometimes known as "beanstalks", after Jack and the Beanstalk.