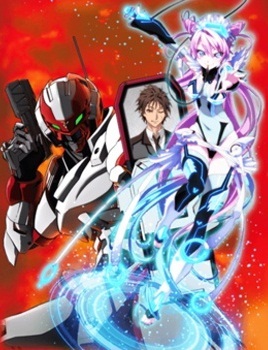 "In response to an increase of heinous crimes, a new movement is picking up steam in police and security forces from around the world. This is the story of the services performed by ACTIVE in Japan."
— Opening Narration.
Advertisement:

In the year 2035 Tokyo was quickly rebuilt from the Third Quicksand Disaster, during which the city sunk into a quagmire, by using high-output Powered Armor called "Willwears". However, these often fall into the wrong hands, thus the National Police Agency established the Fifth Special Public Security Section to deal with such miscreants, using their own specialized set of Willwears.

However, one particular unit — Unit 8 of the Third Mobile Assault Division, simply known as "The Eighth" — is notorious among the police brass for its reckless tactics and the resulting collateral damage, thus they were assigned to a particularly bad part of the city.

Into the scene comes newly-minted, straitlaced Assistant Inspector Asami Kazari, who officially serves as the high command's eyes and ears on The Eighth, assessing their worthiness as law enforcers, even as she makes it her mission to whip the misfits into shape and truly make them a force for good.