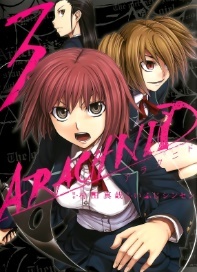 A manga written by Shinya Murata, illustrated by Shinsen Ifuji since 2009 and published on Gangan JOKER, Arachnid (アラクニド) provides an unusual take on the standard shonen Fighting Series, with an interestingly deranged cast and a wide variety of exotic fighting styles.

Alice Fujii does not have a fun life. She's spent the last few years being tormented and abused by her drunken uncle, whilst her unusual mental disorder and dearth of social skills have led to poor grades and a complete lack of friends at school. Then a mysterious assassin kills her uncle, press-gangs her as his apprentice, and subjects her to Training from Hell for a few weeks before trying to kill her when her recruitment application falls through. Now she's got an ever-increasing price on her head as she fends off one murderous, arthropod-themed lunatic after another, and the only allies she can turn to are the slightly less murderous arthropod-themed lunatics.

Arachnid ended on December 2015 at 72 chapters. It is a Stealth Sequel to Jackals and is followed by two spinoffs: Caterpillar and Choubu no Shinobi. In 2020, a sequel titled Blattodea continued the story from where both Arachnid and Caterpillar left off while borrowing elements from the 2017 story Himenospia, which was a reimagining of Arachnid.

An official English translation of the series was made available on Square Enix's Manga UP! app

in July 2022. Due to the 13-years gap between the original publication and the English one, as well as the existence of the sequel, beware of spoilers below.

For Shinya's other takes on people fighting with animal abilities, see Killing Bites and Konchuki. Yū Sasuga's TerraforMARS and Fujimi Yasutaka's The Island of Giant Insects also deal with this kind of concept.

This manga features examples of:

open/close all folders
#-I
J-R
S-Z
"The "Arachnid Hunt" isn't over. I am Kumo. I have become a single arachnid who, in order to survive this lawless world, in order to live..."