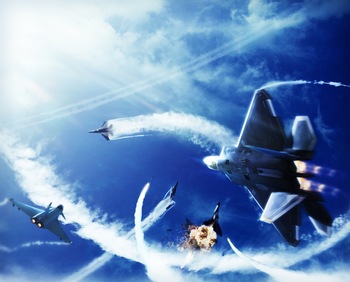 "Your chance comes when the whirlwind lifts the pirate ship. Finish it in the sky!"
—Super Smash Bros. Brawl, Event Match 37
Advertisement:

In which the hero of a video game has to go up in the sky and defeat the enemy. It can be as simple as a dogfight between planes or airships, or as complex as fighting enemies at a flying fortress in an all-out war. If the heroes and their opponents have the power of Flight to achieve this, this will lead to Air Jousting. If they are falling from the sky instead, well, that's another trope.

Common with Sky Pirates, and a leading cause of Disney Villain Death. Compare/contrast Rooftop Confrontation and Free-Fall Fight. If the battle goes up into space, then it overlaps with Astral Finale. If the targets are on the ground, it overlaps with Death from Above.