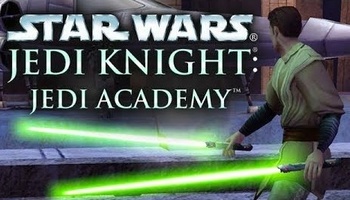 Ten years after the Battle
of Endor, the Imperial Remnant
continues to be driven back by
the New Republic, forcing the
Imperials to adopt increasingly
desperate tactics in the
ongoing struggle.

Meanwhile, Jedi Master Luke
Skywalker moves to restore the
Jedi to their formal place
as peacekeepers of the galaxy
at his Jedi Academy on Yavin 4.

Jaden Korr, a promising
student from Coruscant, is en
route to the Academy after
achieving the impossible:
creating a lightsaber without
any formal Jedi training...
Advertisement:

Star Wars: Jedi Knight – Jedi Academy (2003) is the fourth and final game in the Dark Forces Saga — released for the PC and Xbox in 2003 — essentially an Expansion Pack in the body of a true sequel to Jedi Knight II: Jedi Outcast, featuring a brand new character, Jaden Korr. Jaden has somehow constructed a lightsaber without any prior Jedi training, and news of this remarkable feat results in being transported to Luke's Jedi Praxeum on Yavin 4, where you become the apprentice of Kyle Katarn. The story involves a group of Sith Cultists seeking to resurrect an ancient Sith Lord, Marka Ragnos. Like in Jedi Knight: Dark Forces II, there are two endings, one for each side of the Force, though unlike that game which ending you get is entirely your choice when it is presented, rather than it being determined by your power set - as usual with LucasArts, the light side one was eventually determined to be canonical.

In a change from previous entries, Jaden Korr is entirely customizable, with male and female options, several species, as well as multiple hair and clothing variations. You can also choose from a selection of lightsaber hilts and colors, and later in the game can upgrade to Dual Wielding or double-bladed. Canonically, Jaden was a human male who initially used a purple lightsaber before switching to a single-bladed green one.

The game consists of progressing through missions assigned by Luke Skywalker or Kyle Katarn until you become a Jedi Knight. Unusually, the game takes a free-form yet tiered approach — as an initiate, you can pick any of five missions to take in any order; at apprentice level, you gain a set of five new missions; and at Jedi Knight level, you get five more. You need finish only four missions to progress to the next level, though as you get more powers with each of these missions, it's in your best interest to do them all. In between each level of difficulty is a compulsory mission, linked directly to the main story.

The game was re-released by Lucasfilms Games digitally for the Nintendo Switch in 2020 and the original Xbox version was added to the Xbox Store for Xbox One and Xbox Series X|S, where it can be played through backwards compatibility.