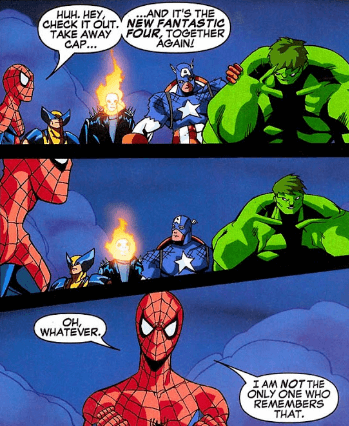 "We remember the New Fantastic Four

, Spidey, we just wish we didn't."
Francine: Stan, we had a dog already.
Stan: I don't think so.
Francine: We did! Five years ago you got Steve an old dog that peed dust and you killed it. We also had another dog named Fussy that you...didn't like or something.
Stan: Francine, those were obviously dreams. I refuse to discuss your dreams in the daytime.
— American Dad!, "Stan's Best Friend"
Advertisement:

This trope does not refer to a positive or neutral Mythology Gag to material that has been excised from canon or was created for a non-canonical work. This trope is about unpopular material being jabbed at in the form of an allusion in another work, effectively making it to the Mythology Gag trope what Take That! is for the Shout-Out trope.