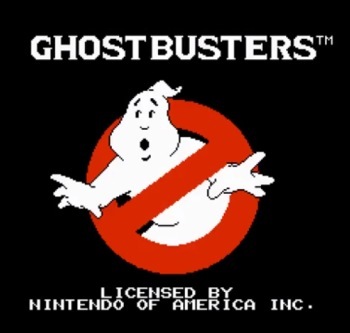 Ghostbusters is a 1984 video game based on the 1984 film of the same name, that was designed by David Crane and published by Activision. It was first released on the Commodore 64 and later ported to various other home computers and video game systems, including the Atari 2600, the NES, and the Sega Master System.
Advertisement:

In the game, you operate the Ghostbusters ecto-extermination business, and your job is to amass $10,000 or more before the city's PK Energy Meter reading reaches critical mass. To do that, you must buy your equipment, then you take on jobs to exterminate buildings of ghosts using your proton packs and ghost traps, being careful not to cross the streams or to miss capturing the ghost, because otherwise you'll be slimed and the ghost will get away. Occasionally the Stay Puft Marshmallow Man will appear and try to stomp down one of the buildings on the city map. To prevent this, you must use ghost bait to lure the Marshmallow Man away or else you could risk losing money having to pay for damages. Once you reach your goal, you must get two of your Ghostbusters past the Marshmallow Man and up to the top of the building (marked ZUUL, one of the demonic minions from the movie) to defeat Gozer the Gozerian. If you succeed, you'll get a cash bonus and a code which you can use to transfer your winnings to the next round of play.

Not to be confused with Ghostbusters: The Video Game or the Sega Genesis game based on the movie franchise.

CONGLATURATION!!! YOU HAVE COMPLETED A GREAT TROPE PAGE. AND PROOVED THE JUSTICE OF OUR CULTURE. NOW GO AND REST OUR HEROES!