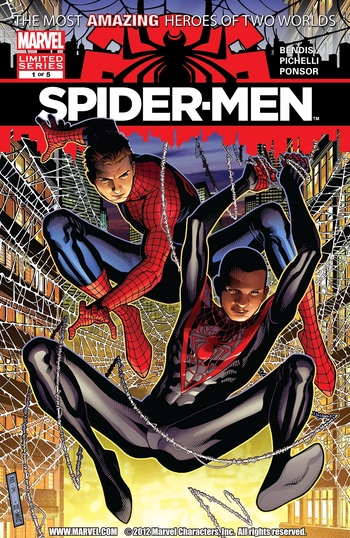 Spider-Men is a major Marvel Comics storyline by Brian Michael Bendis and Sara Pichelli, published in the summer of 2012 and centering on Spider-Man. It is a Milestone Celebration of Spider-Man's 50th year and serves as the first-ever crossover event between Marvel's two most popular universes — the mainstream and Ultimate Marvel.

The story involves long-time Spider-Man foe Mysterio creating a bridge between two universes. The original Spider-Man, Peter Parker, falls through it and across dimensions into the Ultimate Universe. There, he faces a world where Spider-Man's greatest secret is public knowledge and where being Spider-Man led to an early demise for Peter Parker; a world where the child Miles Morales has stepped in to fill the gap as the second Spider-Man.

Miles Morales himself finally gets the chance to meet the hero whose name he earned. Hampered by lack of age and experience, Miles struggles to find a place in a world that extinguished the life of an older and stronger Spider-Man. Perhaps Peter's miraculous reappearance will reveal just what it takes to be the wallcrawler.

But the historic union is not without strings attached. Peter has to face some harsh truths in this new universe. His friends and loved ones are not as he knows them, and the reappearance of those he had thought lost forever taxes his guilt-ridden conscience to the core. Miles must deal with forces beyond his novice experience and shepherd Peter through the Ultimate universe. All the while, Mysterio runs both Spider-Men through a gauntlet of treachery and danger with more sophisticated illusions than ever before while his own ambitions are cloaked in secrecy.

With high stakes and dangerously untrod waters, the series provides a climax for not just the two Spider-Men, but the mythos of Spider-Man as a whole.

Following the destruction of Earth-1610, Miles was imported into the mainstream Marvel Universe upon its restoration by the Fantastic Four, serving as the Spider-Man of New York City while Peter jetsets around the world on business.

In 2017, Marvel published an official sequel to this story, Spider-Men II, once again written by Bendis and drawn by Pichelli, addressing the unaddressed cliffhanger at the end of Spider-Men, which involves Peter and Miles discovering the latter's Earth-616 counterpart.

An animated film loosely based on this storyline (as well as Spider-Verse), titled Spider-Man: Into the Spider-Verse, was released in December 2018.