"Good luck everyone, you're going to die!"
— Unnamed female bystander in the inaccurately translated international dub, who is mostly correct. 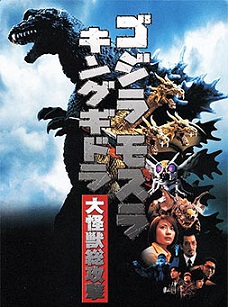 Godzilla, Mothra and King Ghidorah: Giant Monsters All Out Attack is the 25th entry in the Godzilla franchise and the third in the Millennium series; as well as the first (and so far only) Godzilla film to be directed by Shusuke Kaneko. Known as Gojira, Mosura, Kingu Gidora: Daikaijū Sōkōgeki in Japan. It is written by Kaneko, Keiichi Hasegawa and Masahiro Yokotani.

After the lukewarm responses to the previous two films, Shusuke Kaneko (creator of the well-lauded Heisei trilogy of Gamera films) was brought in. He wanted to emphasis Godzilla's immense power, so his original choice for opponents were ordinary monsters like Anguirus, Varan, and Baragon. However, Toho considered the former two not able to bring in enough money, so Mothra and King Ghidorah were brought in instead. Baragon, who was popular in Japan, stayed on. In order to keep that immense power plot point, Kaneko depowered King Ghidorah and Mothra. The themes were more mystical in tone, with Godzilla being possessed by the souls of WWII soldiers and the origins of the Guardians monsters. The film was well received at the box office. It became a favorite of the fanbase for reasons that include its Darker and Edgier tone.

In 2002, Commander Taizo Tachibana (Ryudo Uzaki) comments on the Godzilla attack 50 years ago and the monsters that have come since. A nuclear submarine is downed, and an investigation reveals some very familiar spinal plates. Meanwhile, the Commander's reporter daughter, Yuri (Chiharu Niiyama) investigates the appearance of monsters near Mt. Myoko and Lake Ikeda. She interviews a mysterious old man called Hirotoshi Isayama (Hideyo Amamoto, who tells the legendary guardians of Japan must be awakened before Godzilla (Mizuho Yoshida) returns. Japan has forgotten the sacrifices of the soldiers of WWII and Godzilla will take vengeance for them. An attack on the Bonin Islands and other attacks precede Godzilla's destructive return. He engages with the guardian monster Baragon (Rie Ota and Toshinori Sasaki) in Hakone. Despite Baragon's bravery, he is brutally slaughtered and Yuri is injured in the process. As Godzilla moves unrelentingly forward, Mothra and King Ghidorah (Akira Ohashi) awaken. A battle shall soon take place in Yokohama, where the guardian monsters and the military must work together to take down the ruthless King of the Monsters...

Giant Tropes All Out Attack: