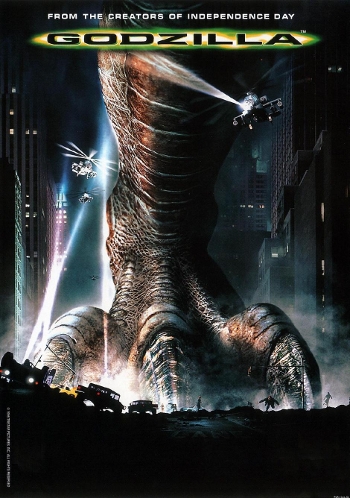 "We need bigger guns!" (Just not quite as big as this poster implies.)
"Size does matter."

Godzilla is a 1998 American remake film of the Japanese film of the same name and the first feature-length Godzilla film to be made by an American team. It was co-written and directed by Roland Emmerich, director of Independence Day and Stargate, and starred Matthew Broderick, Jean Reno, Maria Pitillo, Hank Azaria and Kevin Dunn. The film was released on May 20, 1998, by TriStar Pictures.

The film follows the attacks of the titular creature on Manhattan, following his apparent creation via radioactive fallout from atomic bomb testing decades before. The film follows the attacks, beginning with the off-shore attack of a Japanese fishing vessel and culminating in a confrontation of Godzilla and the American military in the Big Apple. As all this is happening, an American scientist, his Intrepid Reporter love interest and their friends team up with French secret agents to examine the creature's behavior more closely and find a way to keep it from bringing even greater disaster upon mankind.

The film spawned an animated sequel called Godzilla: The Series. While it was intended to spawn a new franchise in the United States, the movie was not deemed successful enough to warrant another sequel. Ironically, it instead renewed Toho's interest in the franchise, which had actually ended with Godzilla vs. Destoroyah in anticipation of the American franchise, launching the Millennium series started by Godzilla 2000. The events of another Millennium movie, Godzilla, Mothra, King Ghidorah: Giant Monsters All-Out Attack!, actually reference this one as being canon... Which curiously makes this film a Stealth Sequel to the 1954 original in that regard, since G.M.K. is also direct sequel to that movie. The film's version of Godzilla was later renamed "Zilla" by Toho and pitted against the Japanese Godzilla in Godzilla: Final Wars, in which Godzilla destroyed his American counterpart in thirteen seconds without breaking a sweat.

One of the soldiers looking for Godzilla fails to see something.

Example of:
Giant Eye of Doom

One of the soldiers looking for Godzilla fails to see something.