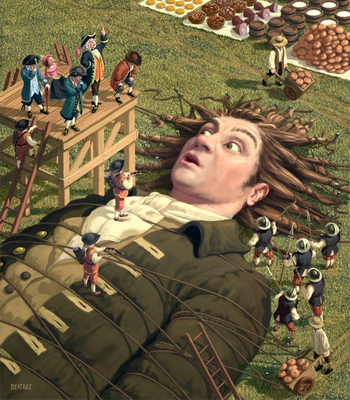 When a bunch of tiny people need to restrain a (to them) giant one, a classic method is to bind the bigger creature to the ground while asleep. Waking up, the large person finds they've been tied down by string — lots of it — stretched over their body between stakes, allowing one of the mini-people to perform a Colossus Climb onto their chest and make demands.

Prone to Fridge Logic, as the amount of string used is often far more than a bunch of miniature people would logically have on hand. How they could pound stakes deep enough into the ground to be effective, without waking their intended captive, is likewise often Hand Waved.

A sister trope to All Webbed Up, in which the binding is done by Big Creepy-Crawlies (or sometimes Spider People) rather than little people. Subtrope of Bound and Gagged, minus the gag.