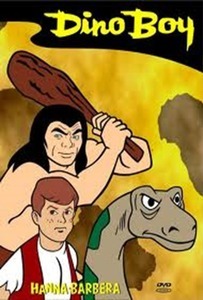 One of the many animated series produced by Hanna-Barbera, Dino Boy was a companion series to Space Ghost.

Dino Boy in the Lost Valley was a series about a young boy named Tod, who was forced to parachute from a plane that crashed, ending up in a mysterious valley, lost to the outside world and filled with not only prehistoric lifeforms, but creatures utterly alien to Earth. Saved from death at the jaws of a sabertoothed tiger by a caveman named Ugh, Dino Boy resigns himself to surviving in The Lost Valley.

See also Valley of the Dinosaurs, a later Hanna-Barbera series with a similar premise.